On September 29th and 30th, 2022, we are organizing the NVK Young Researchers Retreat! Please find the preliminary program and registration details here.

All participants will present their work, both PhD students and early researchers working in industry or industry are welcome to contribute, which will result in a wonderful and inspiring program! Our key-note speaker, Dr. Yesid A. Ramirez, will talk about his research related to cannabis and cannabinoids as therapeutic agents. Additionally there will be plenty of time to network with our sponsors from industry, and of course with your fellow young crystallographers. Also, the career session will provide a overview of career options and plenty of time to discuss these with people who have been in the field for a longer time, both industry and academic science.

In short: interesting science, plenty of options to network, think a bit about your future career, and of course we will have a lot of fun! We hope to see you there!

Here it is: the first online NVK newsletter! Please have a read and let us know what you think!
Also, please remember to register for the NVK Young Researchers Retreat.

The symposium and ALV will be held on June 17th in Utrecht. Find more information about the day full of interesting lectures and the possibility to meet up again with old friends and colleagues here.

The Young Researchers Retreat will be held on September 29th and 30th in Nunspeet. Find more information about those two days packed with crystallography, a lot of fun and an excellent opportunity for networking with fellow young scientists here.

It is now possible to register for the NVK symposium 2022 that will be held on June 17th in Utrecht.

Check out the program and abstracts here and click the Register button to take part in a day full of interesting lectures and the possibility to meet up again with old friends and colleagues.

See you in Utrecht!

The Local Organising Committee of ECM 33 have decided to extend the deadline for abstract submission. The new final deadline is May 16th 2022, midnight (Paris time).
Submit your abstract here.

The NVK Symposium 2022 and the yearly ALV will take place on June 17, 2022, from 10:00h – 17:00h in room 1.30 in the David de Wiedgebouw of the Universiteit Utrecht at the Universiteitsweg 99 in Utrecht. You can check the program here.
Registration will be possible from mid-May via this website.

The first NVK Young Researchers Retreat (YRR) will be held on 29th and 30th of September 2022 in Nunspeet! The event will consist of two days with talks, a lot of fun, poster presentations and it is an excellent opportunity to network with fellow young scientists in the broad field of crystallography. You can find more information here. Registrations open soon! 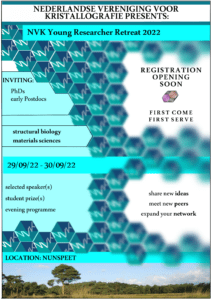 It is still possible to nominate scientists for the ECA Perutz Prize 2022, HCS/ECA Kálmán Prize 2022, and ECA/ENSA Bertaut prize 2022.
The deadline for nominations is the 15th of April.

The European Crystallographic Association (ECA) is pleased to announce a call for nominations for three different prizes:

• the twelfth Max Perutz Prize. This Prize will be awarded in recognition of meritorious achievements in any branch of crystallography to an individual scientist clearly affiliated with the ECA. More information can be found here.

• the second Alajos Kálmán Prize. This Prize will be awarded to an individual researcher in recognition for outstanding scientific contributions in the field of structural sciences within the last 5-10 years. The nominee must have a clear affiliation with ECA. The prize has been established by the Hungarian Chemical Society and is endorsed by ECA. More information here.

• the tenth Erwin Félix Lewy Bertaut Prize. This prize is awarded to a young scientist (up to 8 years after finishing her or his PhD thesis) having a clear affiliation with the ECA/ENSA region, in recognition of notable experimental, methodological or theoretical contributions to the investigation of matter using crystallographic or neutron scattering methods. The European Neutron Scattering Association (ENSA) and ECA award the Bertaut Prize in a regular alternating sequence, or as specified by the two associations based on mutual agreement. More information here.

The prizes will be awarded at the next European Crystallographic Meeting (23 – 27 August 2022) in Versailles, France.

Registration is open for the Hybrid 18th International Conference on X-Ray Absorption and Fine Structure, which will be held from 10 – 15 July 2022 in Sydney, Australia. 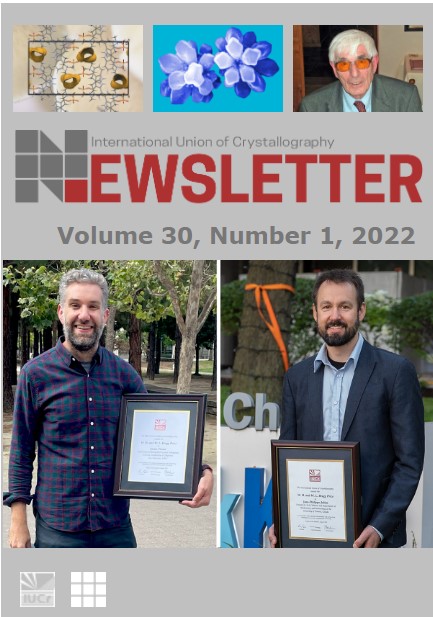 IUCr Newsletter Vol. 30, No. 1 is now available, with a letter from the President, calls for nominations for the Ewald prize and the Bragg prize, a new section in IUCrJ,  discussions on the solution of the protein folding problem and more.